Country may not be my thing, but I dig Kacey Musgraves, and truthfully, she may not even be country, at least not in the traditional sense. Her approach is more melodic — the foundations of the songs that line her terrific debut record Same Trailer Different Park are solidly pop/rock, even if what’s built upon them are layers of country flourishes. This makes for an approachable and highly enjoyable listen, since Musgraves, while quite young, is already a remarkable talent. She reminds me of the early-’70s Southern California country-rock acts like the Eagles, Jackson Browne, and Linda Ronstadt, which churned out hits that were tender and sensitive and became quite popular. I’m not sure Musgraves is going to be a pop star or a hit maker any time soon — the country industry is pretty insulated from what’s left of the rock & pop mainstream — and her album’s strictly organic production, while welcome and inviting to my ears, isn’t going to win over anyone currently drinking the EDM Kool Aid, for instance. But expect it to appear on many year-end lists — it will certainly come close to topping mine. All the songs are good — my favorite is “Back on the Map” — and the sense of craft is exceptional from both a songwriting and production standpoint. 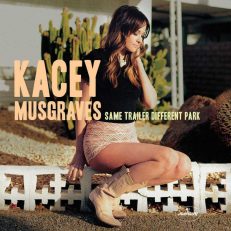