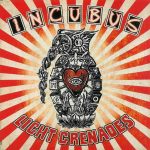 Until Tom Erlewine compared Incubus to Radiohead in his review of their 2006 album Light Grenades for AllMusic, I had never really considered them that alike. There are some similarities there, for sure, particularly in the way both bands push the boundaries of alternative rock by incorporating electronic elements into their core sounds. But the similarities are really more on the surface; anyone who has any spent any kind of time carefully studying both bands — like me, for instance — knows that although some general directional details may overlap, these are pretty different bands. Which is why it’s especially curious to see that, in 2013, the lead singers of both bands have formed side projects with their respective producers. 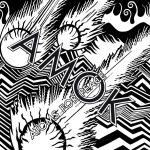 I’m not kidding. Early this year, Radiohead vocalist Thom Yorke and producer Nigel Godrich released an album called Amok under the name Atoms for Peace. Then, about six months later, Incubus lead singer Brandon Boyd and longtime producer Brendan O’Brien released a self-titled debut LP as Sons of the Sea. In another era, both albums would have probably been released as solo records, but nowadays nobody really buys music anymore, so both Yorke and Boyd clearly didn’t see much point in doing that. Freed from a band setting, both vocalists instead saw an opportunity to unleash their ids and expand their creative horizons. Radiohead’s most recent album, 2011‘s The King of Limbs, was criticized by many for being too obtuse, and Amok was arguably even more out there. (For the record, I like both of them.)

Similarly, Incubus’ most recent album, If Not Now, When?, was panned by critics (though not many even reviewed the album in the first place) for lacking the kinetic energy of the band’s previous albums. In truth, the band had been gradually moving away from the heavy rock that defined — and still defines — them for years. To fans, the album was something of a surprise, but it was a pretty natural evolution of Incubus’ sound. To the press, who have never really paid any attention to Incubus at all, it was viewed as a half-hearted attempt to land back in the mainstream after a half-decade hiatus. Sons of the Sea is a pretty logical expansion of the sounds explored on If Not Now, When?, but there is considerably more color this time around — I suspect the subtle, textured approach of If Not Now, When? left the critics absolutely cold.

There’s more punch, and the songs are more pop-oriented and catchy, which may not result in a particularly deep listen, but boy, does Sons of the Sea zip right on by — it’s ten tracks and clocks in at just 40 minutes. Fans of Incubus will feel right at home with Sons of the Sea; it has the unmistakable sensibility of an Incubus record — or at least the cousin of one. It’s Brandon Boyd’s show, of course, and vocally, he’s never been better than he is here, but O’Brien provides some truly excellent material for him, as well. According to interviews, it was a collaborative process, but generally speaking, Boyd provided the lyrics and vocal melodies while O’Brien handled most of the instrumentation. Boyd himself actually performed all of the drums and percussion, but most of it was replaced by session drummer-god Josh Freese‘s contributions very late in the recording process.

Though there was plenty of press and publicity in the lead up to the album’s release, critical reviews, at this point, are pretty much non-existent, which sucks. (Not even AllMusic has a full review with a score.) It’s bad enough that music publications basically don’t like Incubus, but the fact that they basically decided not to review the album because it’s not “big” enough — this is a self-released record, basically (the distribution service INgrooves was used) — even though they clearly knew it existed is troubling, to say the least. In fact, Metacritic hasn’t even created a page to collect all of the album’s reviews — and this is actually an album the critics would like, too. It’s got the indie cred going for it, is reasonably sophisticated, is immaculately produced, and features a good set of songs. Even my least favorite song, “Where All The Songs Come From,” is sonically first-rate and is still interesting aside from a flat chorus that’s kind of a dud. Some other really, really strong songs are “Untethered,” “Lady Black,” and “Jet Black Crow.”

Give this a go. Chances are, Sons of the Sea slipped through the cracks and you never listened to it or even heard of it.

Tags: 2013 Albums, Sons of the Sea, Sons of the Sea (Album)
Summary
Sons of the Sea is an immensely pleasurable debut from the side project of Incubus frontman Brandon Boyd and alternative rock producer Brendan O'Brien, with rich, colorful textures and instantly memorable songs.
Good
Bad
8.5
Great