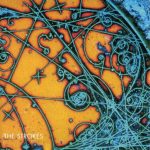 I’ll just come right out and say it: my love for the Strokes basically begins and ends with their fabulous debut, Is This It. I found their follow-up, 2003‘s Room on Fire, to be pleasant but far from distinctive, and to be honest, I haven’t listened 2006‘s First Impressions of Earth and 2011‘s Angles at all. (Both are supposed to be unremarkable.) The Strokes, unfortunately, have become the definition of passé; their cultural (and musical) relevance has long since faded. To most of us, they have always been “that band that had a great debut album.” And that’s too bad, since Is This It really is a lot of fun to listen to even now. So how is Comedown Machine? Well, pretty blah. I tried pretty hard to like it all three times I listened to it on Rdio, but I just couldn’t. The vibrant energy of Is This It is long gone, and even though Comedown Machine is very polished, it’s not much fun. And the songwriting isn’t exactly distinguished, either. So yeah, this is one to skip. Listen to Is This It again instead, or better yet, buy it on vinyl and listen to it.

Tags: 2013 Albums, Comedown Machine, The Strokes
Summary
The garage rock of the Strokes' past is pretty far in the rear view mirror now, and while that in itself isn't necessarily a bad thing, where the band has ended up with Comedown Machine doesn't appear to have been worth the journey. It's full of mostly unremarkable songs, which is too bad, and the band sounds like it's just going through the motions, which may very well not be the case, but it's how it comes across.
Good
Bad
5
Average