It’s not a stretch to say that Kind of Blue rivals the 1941 film Citizen Kane as the greatest American work of art produced in the entire 20th century. It probes the depths of consciousness and space in a way that’s both riveting and relaxing, thanks to the playing of arguably the greatest assembly of musical talent ever on record. Miles Davis on trumpet, John Coltrane on tenor sax, Cannonball Adderley on alto sax, Bill Evans on piano, Jimmy Cobb on the drums, Paul Chambers on the bass. (Pianist Wynton Kelly filled in for Evans on “Freddie Freeloader.”) All were giants of jazz who convened on just two days, March 2 and April 22, 1959, to create this masterpiece. It’s funny, I hadn’t looked at the booklet of my Kind of Blue CD since the day I bought it in the spring of 2005 until just now. I have always had this memory of reading an essay in there where somebody says, “I have only listened to Kind of Blue for the past couple years” or something like that. I had absolutely no clue, until right now, that the person who says that is none other than deceased Allman Brothers guitarist Duane Allman.

This is what he says to music writer Robert Palmer after a show:

“You know,” he told me one night after soaring for hours on wings of lyrical song, “that kind of playing comes from Miles and Coltrane, and particularly Kind of Blue. I’ve listened to that album so many times that for the past couple years, I haven’t hardly listened to anything else.”

At the time I read that, I had no idea who Duane Allman was. I wasn’t familiar with jazz at all (that’s why I had bought Kind of Blue), but I was even less familiar with the blues, if that was possible. So it was with a shock that I learned that it was him who said that. Duane Allman left us far too early, but he was a hell of a guitarist and is someone I have great admiration for. And I understand where he’s coming from with his sentiment that Kind of Blue can just take over your listening life. For me, every time I hear the bass come to life at the beginning of “So What,” I know I’ve just lost another 45 minutes of my life. I’m not sure there’s another album that completely washes over your mind like Kind of Blue does.The image I think of when I listen to Kind of Blue is of a translucent curtain draped over an open window on a hot summer day. You can sort of see through it, but not really, and the only glimpses of what’s truly on the other side come as a result of a breeze that, on a day as hot as this one, is met with equal parts suspicion and relief.

Speaking of suspicion, I never knew this before reading the following information provided on the back of my CD:

If you happen to be a musician, you may have already noticed [a] problem when you tried to play along with earlier versions of Kind of Blue. Three tunes were in the wrong key, which means that the original album and all subsequent reissues (except for the recent gold Mastersound edition, which lacks the alternate “Flamenco Sketches”) were recorded at the wrong speed — making all the pitches slightly sharper than “real life.”

What? You’re telling me that millions who have bought and loved Kind of Blue and have been influenced by it possibly more than any other album ever actually had copies where the entire first side was off-key? That’s just ridiculous. Just about everything about this album is incredible, really. Something else I wanted to mention was Bill Evans’ original liner notes which describe the process for recording this mind-blowing set:

As the painter needs his framework of parchment, the improvising musical group needs its framework in time. Miles Davis presents here frameworks which are exquisite in their simplicity and yet contain all that is necessary to stimulate performance with a sure reference to the primary conception. Miles conceived these settings only hours before the recording dates and arrived with sketches which indicated to the group what was to be played. Therefore, you will hear something close to pure spontaneity in these performances. The group had never played these pieces prior to the recordings and I think without exception the first complete performance of each was a “take.”

I can still remember my dad noticing that I had bought Kind of Blue and saying, “What did you buy that for? That’s not your bag.” I was really into classic rock at the time, but I noticed Kind of Blue had come in at number twelve on Rolling Stone‘s greatest albums list and figured I’d give it a shot. I can also still remember playing it on his stereo for the first time and thinking, “Hey, I think I like this.” Well, here we are, years later, and I’m counting it among my all-time favorite albums. I’ve listened to it hundreds of times, probably, and I still don’t know every note of it. My subconscious does, though. 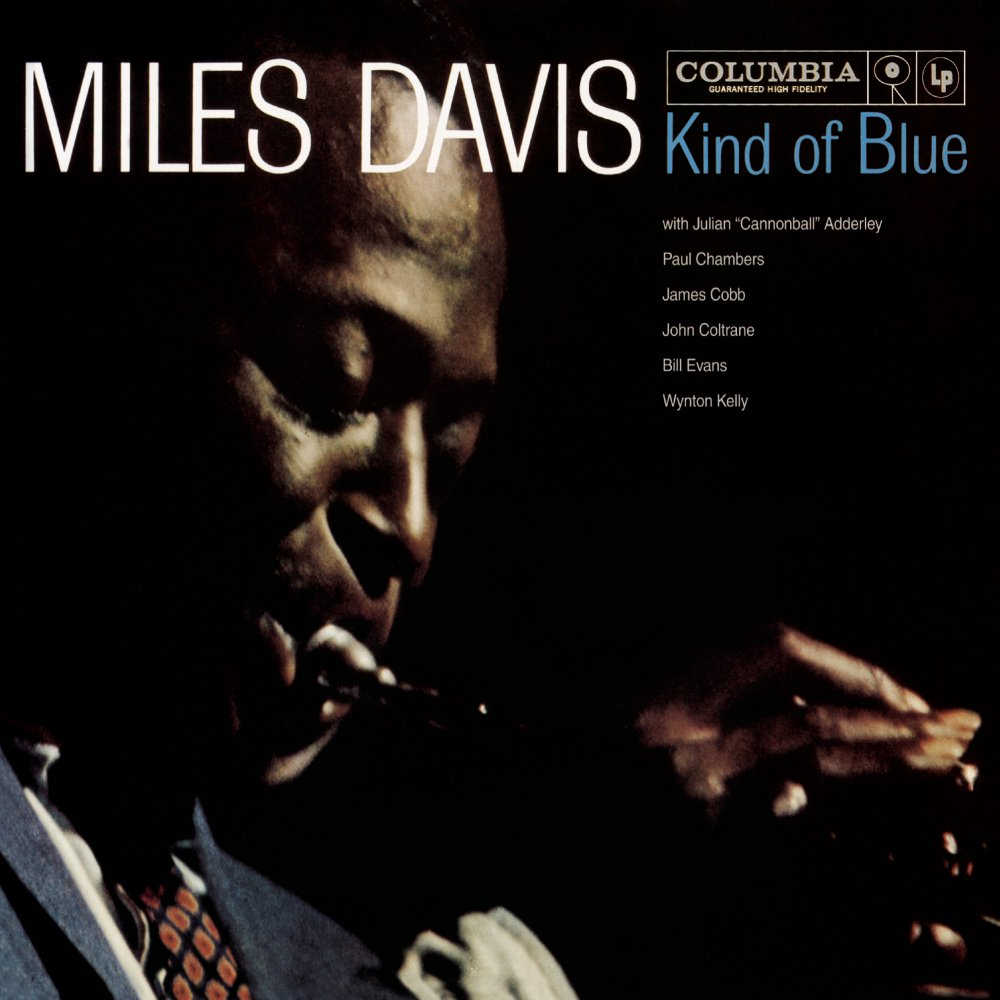